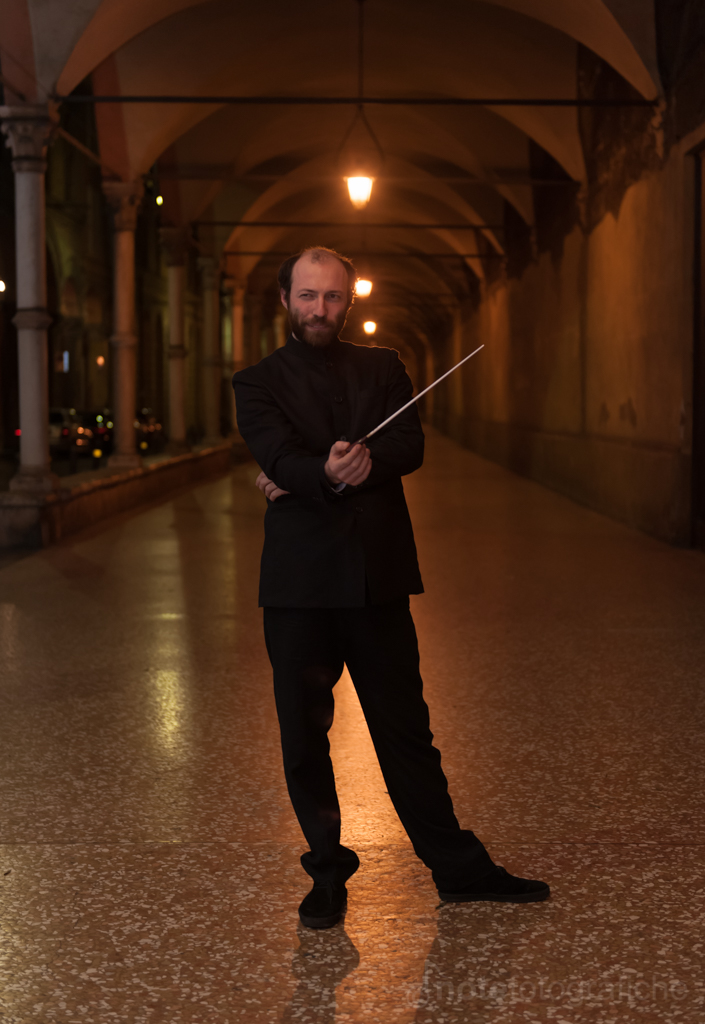 Composer and conductor, Tommaso Ussardi was born in Venice in 1984. He began his musical studies under the guidance of his father, Composer and Professor at the Conservatory Benedetto Marcello in Venice. In the first years he studied classical guitar, clarinet, double bass and composition at the Conservatory in Venice, then he attended the Conservatory G.B. Martini in Bologna, where he graduated with honors in Composition, Choral Conducting and Orchestral Conducting. He attended several masterclasses with well-known Maestros such as C.A.Grandi, C. Landuzzi, S. Colasanti, L. Acocella, D. Pavlov, D. Renzetti. In summer 2017 he was selected as an active student at the Accademia Musicale Chigiana in Siena at the masterclass of Maestro Daniele Gatti.

He won the Galletti Prize 2011, the Zucchelli Prize 2013, the Magone Prize 2015 and 2016, the Honorable Mention at the “Premio Nazionale delle Arti 2013” (National Award of the Arts 2013). In 2014 he was admitted to the final phase of Malko Competition. His compositions were performed at the Regia Accademia Filarmonica in Bologna, the Teatro Comunale in Bologna, the Conservatoire National Supérieur Musicque et danse de Lyon where he was invited as both conductor and composer for the international festival “Suona Italiano”. As conductor, he made his debut in 2012 during the “Schoenberg Experience” at Teatro Comunale di Bologna with the performance of Schoenberg’s Pierrot Lunaire for the 100th anniversary of the first performance. Thus, he began a journey on the musical theater of the early ‘900 and together with the director Ulduz Ashraf Gandomi he realized important productions for educational purposes such as Histoire du Soldat by I. Stravinsky, Pierino and the Wolf by S. Prokofiev, The Carnival of Animals by C. Saint Saens. He collaborates with various international orchestras and ensembles including the Philarmonic Orchestra of Teatro Comunale in Bologna, the Italian Youth Orchestra, the Orchestra and Choir of Teatro Comunale in Bologna, the Orchestra Senzaspine, the Orchestra Sinfonica Abruzzese, the Orchestra ” I Pomeriggi Musicali “, Orchestra of the Opera Rouen Normandie, the Vidin Phylarmonie Orchestra, the Ensemble contemporain de Lyon, the Ensemble Res Humana, ranging from symphonic to operatic repertoire, from baroque to contemporary repertoire, often interpreting works by contemporary composers as premiere.

In January 2017 he worked together with Silvia Colasanti and Guido Barbieri for the realization of the opera “Le imperdonabili” directed by Alessio Pizzech, with actress Clara Galante, staged at the Teatro Sperimentale in Ancona, the Teatro Lauro Rossi in Macerata and the Teatro Rossini in Pesaro. In 2013 he founded the Senzaspine Orchestra, where he is President, Artistic and Musical Director. A symphony orchestra under 35 with which he performs in over 60 concerts a year in major theaters of the national territory collaborating with internationally well-known artists such as Enrico Dindo (Teatro Duse October 2015), Laura Marzadori (Bologna Festival Teatro Auditorium Manzoni June 2016), Sofya Gulyak (Teatro Consorziale di Budrio April 2016), Dejan Bogdanovich (Teatro Auditorium Manzoni June 2015), Alessandro Fossi (Teatro Duse February 2015) and finally young talents as the finalist at the 2015 Tchaikovsky Prize Jonathan Roozeman (Teatro Toniolo October 2015), Anastasiya Petryshak (Teatro Consorziale in Budrio, October 2016), Anna Tifu and Silvia Chiesa (Amiata Festival 2017) and Domenico Nordio (Teatro Manzoni in Bologna, April 2018).

In October 2015 he made his operatic debut conducting the opera Gazza Ladra by G. Rossini and Elisir d’amore by G. Donizetti at Teatro Duse in Bologna, in collaboration with Bologna Festival, in February 2016 he conducted the Barbiere di Siviglia by Rossini at Teatro Borgatti in Cento. Since April 2016 he has established an interesting artistic collaboration with the singer John De Leo and the writer Stefano Benni. In October 2016 he debuted as creator and presenter of a radio program at Radio Città del Capo entitled “Classica Senzaspine”, a program dedicated to the understanding and popularization of classical music.

In January 2018 he made his debut at Teatro Massimo in Palermo conducting Serva Padrona by Pergolesi with the resident orchestra of Teatro Massimo under the direction of Roberto Catalano.

In September 2018 he will debut in the Opera and Ballet Season 2018 of Teatro Massimo in Palermo in a ballet by choreographer Carolyn Carlson with music by P. Glass, M. Gordon, M. Monk and N. de Zorzi. 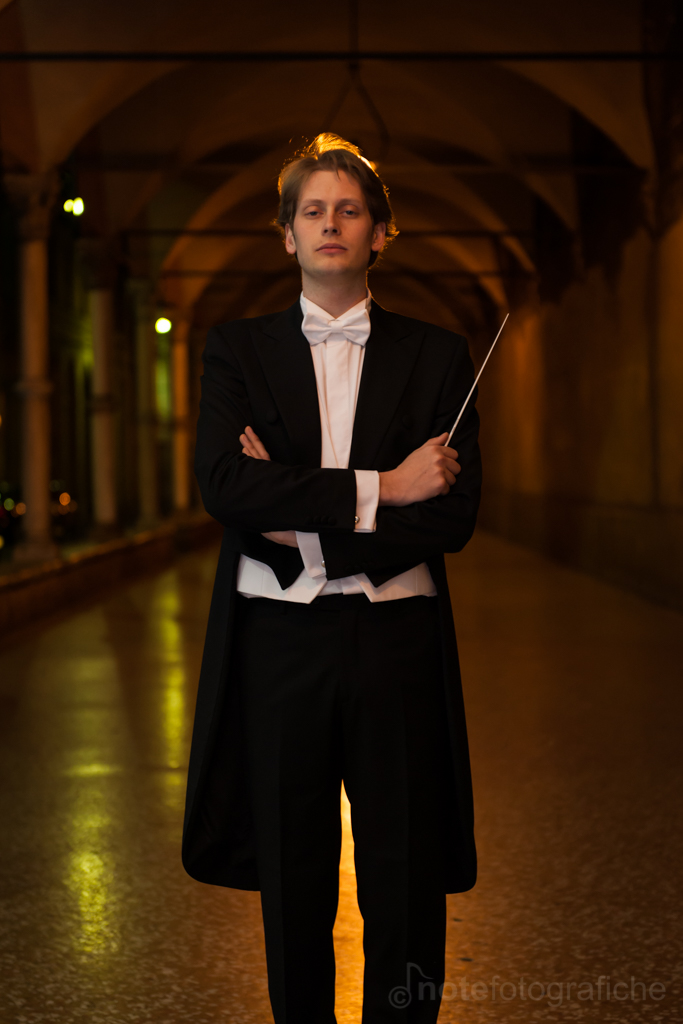 Matteo Parmeggiani was born on December 6th 1988 in Bologna. He began studying piano since he was a child. He studied Composition and Orchestral Conducting with Gianpaolo Luppi and  Luciano Acocella at the Conservatory ‘G. B. Martini” in Bologna, where he graduated with honors. He also attended conducting masterclasses with Gianluigi Gelmetti and Michel Tabachnik at the Accademia Musicale Chigiana.

In 2016 he was selected as an active student at the Accademia Musicale Chigiana in Siena at the masterclass of Daniele Gatti, taking also part at the final concert. He has worked as assistant conductor in several opera productions such as “Romeo et Juliette” by Gounod, “Carmen” by Bizet, “Traviata” by Verdi and “Adelaide di Borgogna” by Rossini, in the theaters of Marseilles, Liege, Rouen, Wildbad, thus having the opportunity to work with artists such as Annick Massis, Patrizia Ciofi, Giovanni Meoni, Natalie Manfrino, Alessandro Liberatore, Sandra Pastrana, Cristiano Cremonini.

As assistant conductor for the symphonic repertoire he has collaborated with several artists, including Maurizio Baglini and Silvia Chiesa. As orchestra teacher, he has collaborated with renowned colleagues such as Paolo Grazia, Gabriele Buffi, Paolo Mancini and other first parts of  Teatro Comunale in Bologna. His compositions have been performed at different events, such as at Teatro Comunale in Bologna in 2011, at Rocca di Vignola in 2013, in Como in 2014 and in Lecce in 2015. In summer 2011 he attended an international conducting masterclass in Pitesti (Bucharest), held by Maestro Dumitru Goia. In 2012 he won 1st prize and the scholarship at the orchestral competition ‘Galletti’ in Bologna.

In May 2013 he founded the Senzaspine Orchestra, a symphonic orchestra, which he conducted on several concerts at Teatro Auditorium Manzoni (debut in September 2013), at Teatro Duse (debut in March 2014) in Bologna and in other important theatres such as Teatro Pavarotti in Modena (2015) or Teatro Sanzio in Urbino (2016). In particular since 2014 at Teatro Duse the Senzaspine Orchestra has had its own symphonic season and he has been the musical director.

He also had the opportunity to conduct orchestras such as the Sinfonica Abruzzese, the Magna Grecia Orchestra, the Cherubini Orchestra, the Orchestra Giovanile Italiana, the Orchestra of the Accademia Filarmonica di Bologna, the Orchestra of the Theater in Rouen. In 2014 at Teatro Manzoni he conducted the pianist Sofya Gulyak, an internationally renowned artist with whom he has collaborated since then. In October 2015 he made his operatic debut conducting ‘Gazza Ladra’ by Rossini at Teatro Duse in Bologna, in collaboration with Bologna Festival. On November 4th 2015 he conducted the Cello Concerto in B minor and the Symphony No. 9 ‘From the New World’ by Dvořák with the prestigious soloist Enrico Dindo. In December 2015 he made his debut at Teatro Comunale Pavarotti in Modena, in cooperation with prof. Quirino Principe.

On June 9th 2016 he made his debut in Bologna Festival at Teatro Manzoni, soloist Laura Marzadori, first violin at Teatro alla Scala in Milan. In 2016 he also conducted the Violin Concerto No. 1 by Paganini, soloist the violinist Anastasiya Petryshak. Moreover he conducted a concert dedicated to Giuseppe Verdi, in collaboration with Bologna Festival and the Chorus of Teatro Comunale in Bologna. In August 2016 he took part in the masterclass held by Maestro Daniele Gatti at the Accademia Musicale Chigiana in Siena, also conducting in the final concert at Teatro dei Rozzi. In November 2017 he made his operatic debut in “L’elisir d’amore” by Donizetti, in a new production at Teatro Duse in Bologna and at Teatro Nuovo in Ferrara, in collaboration with the Teatro Comunale and Scuola dell’Opera in Bologna. In 2018 he conducted the concert with Osuaeh (Mexico) and two symphonic concerts with the Sonova, Symphony Orchestra of Northern Virginia (USA). In September 2018 he will also be conducting at the international festival Anima Mundi in Pisa, whose artistic director is Sir John Eliot Gardiner.